Teaching online journalism requires a strong knowledge of the industry and the constant changes within it. It’s important to not only teach the medium but also to work within it. This helps me stay on top of legal and ethical issues in the industry, as well as new software tools and resources I can bring into the classroom.

I have always shown great initiative in learning and growing with the online media. Here are some of the current and past projects I’ve worked on with students and professional journalists in two decades of online journalism:

The Journalist’s Toolbox
I founded Journalist’s Toolbox in 1996 as a page of links off an online syllabi I built for a Northwestern University Medill School of Journalism Newswriting class. I turned the site into a dot-com in 2000 and sold it to the American Press Institute in 2002 while continuing to update it for the organization. API sold the site (and my services) to the Society of Professional Journalists in 2008. The Toolbox now resides at SPJ and serves as a great teaching tool for newsroom trainers, college professors and high school instructors.

SPJ uses me as a part-time contractor to keep the site updated, write the twice-monthly newsletter, build training videos and interact with readers. The hours are flexible and do not interfere with my teaching schedule. I also established a popular Twitter account for the site that shares tools and resources. It has attracted more than 52,000 loyal followers: @journtoolbox

The Red Line Project
The Red Line Project was several years in the making. Living in Wrigleyville and Lincoln Park off and on since 1995, I always wanted to develop a local site that covered neighborhood news near various Red Line El stops. With news outlets cutting budgets and coverage in some of these areas, I saw an opportunity to fill that void. The Red Line Project was launched in February 2011 with my students in my Online Journalism II class and has been updated and maintained by graduate and undergraduate students at DePaul until 2014, and at UIC since then. The site — redesigned in March 2022 —  includes multimedia packages, social media curation, maps, links, tweets and some hard news reporting. Students are assigned various neighborhoods to cover and produce news and features. 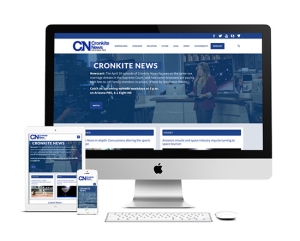 Cronkite News is the news division of Arizona PBS. My team redesigned the news organization’s website to be mobile-friendly. We used Bootstrap to build the responsive site, which launched in spring 2015. Mobile/tablet traffic went from 8 percent to 56 percent in its first 10 months. The students in my digital production bureau also built graphics, multimedia and interactive features for the site, as well as compiled weekly analytics reports. 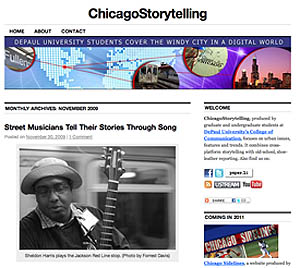 Chicago Storytelling
I founded ChicagoStorytelling during my 2009 summer studies at Poynter. I wanted to build a “quick and dirty” way for students to showcase their online packages for my graduate and undergraduate courses at DePaul. It mixed some long-form storytelling, multimedia with shorter news pieces. It gained some nice traction for two years, peaking at about 15,000 unique visitors a month. The site launched as a “dot-com” with coverage of Chicago’s failed Olympic bid in October 2009. 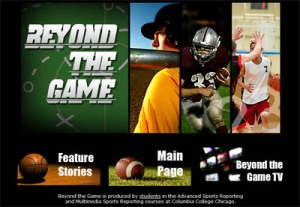 Beyond the Game
I built this site with a group of 16 Columbia College Chicago seniors for an Advanced Sports Reporting course I co-taught in the spring of 2009. Only three students in the class had any previous online experience (class or professional). We incorporated video, SoundSlides photo slideshows and other multimedia and tailored long-form magazine storytelling to fit in an online medium.

WashingtonPost.com: “Free Our People”
I was the lead copy and development editor for this WashingtonPost.com multimedia project in 2000. I worked on Post.com’s news desk as part of an ASNE fellowship while teaching at Northwestern and was hired after the fellowship ended. Nearly 10 years after our team produced this project, it remains on WashingtonPost.com as one of the “Best of the Post” sites. (Note: The site is archived so not all of the Flash and visual elements continue to work.)

ChicagoTribune.com
I was one of the 11 founding editors of the Tribune’s Web site in 1996. I served as Internet Sports Editor for two years before leaving to teach journalism full-time at Northwestern, where I had worked as an adjunct instructor.

NFL Blog Blitz, Bears Writer
I contribute one or two blog posts a week to the NFL’s official blog site.

BCSFootball.org
During a seven-year span in sports marketing, I oversaw the team that developed the Bowl Championship Series (college football bowl system) Web site. The site is now maintained by FOX Sports.

Omaha Sports Commission
I also developed this site during my sports marketing career. The site played a key role in Omaha landing the 2008 U.S. Olympic Team Trials for Swimming. We built an online registration database that attracted more than 2,000 volunteers to work at the event.